Enlightenment through an Encounter with Drunkenness 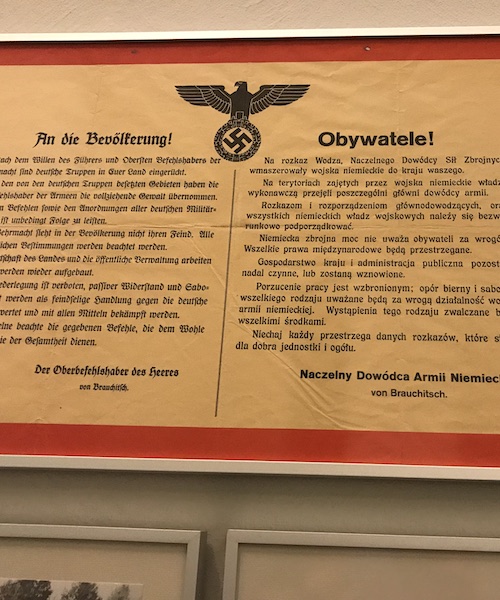 Although my status as a first-generation American has played and continues to play an immense role in shaping experiences throughout my life, my identity as a Polish American in particular was never really something that had gross implications outside of my familial life. The fact that I had Polish heritage itself was never something that I had to “face” or truly consider in the United States. This largely has to do with the privileges that come from being the daughter of white, European immigrants in a society in which race plays a tremendous role.

Since arriving in Berlin, my awareness of my Polish heritage, as well as the ways it influences my identity and thus contours my social interactions and my understanding of the world around me, has experienced a multi-level metamorphosis.

For one, living in Berlin has exposed me to situations and emotions with which I never before had to reconcile. Prior to departing, my mother told me to be careful not to make a point of my Polish heritage in Berlin, since it would lead to being perceived in a specific (read: negative) way. I brushed off her comment as antiquated and even went as far as to say that today was “a different time,” thinking her comment was rooted in WWII animosity. On my second Sunday abroad, I visited a lake in southern Berlin. During the train ride back home, a trio of middle-aged men came on board, visibly very drunk—blasting music and dancing—and speaking Polish. I heard grumbles around me, commenting on the behavior of the group. The content of the comments, however, was not that the group was drunk and therefore obnoxious, but rather Polish and therefore drunk. Of course, I wanted them to stop blasting music and swinging on the pole in the train car. But more than anything, I wanted them to stop speaking Polish. When the trio left, the man sitting across from me turned to the woman beside him and said, “What do you except? They’re Polish. No surprise there.” I had never in my life felt as embarrassed as I did in that moment.

Since my arrival in Berlin, every time I have heard Polish on public transport or seen a fellow passenger in Poland memorabilia, they have been visibly intoxicated. Embarrassment as a result of my national identity was something that I had never considered prior to studying abroad. I know there are stereotypes that are alive and well in America, but I never had to face externally and reconcile internally their manifestations and the effects they have on perceptions of Polish Americans.

I have also grown much more cognizant of realities that I had given little attention to in the past. I recently visited my Polish family for a weekend and among the first things I was asked was, How are our enemies? I was completely taken aback by the question. I knew that so many Poles go to Germany in search of work and higher living standards—and yet, the historical perception of the “enemy” was woven seamlessly into the conversation. In crafting a response, which included the need to balance historical cognition with an orientation towards the future and the necessity of separating the politics from the people, I found myself realizing the value of my presence in Berlin as a Polish American; that is, I realized that my decision to live in Germany for four months as the daughter of Polish immigrants and as a Polish-American dual citizen in a very minute way demonstrated that the times are in fact different, but not in the way I had first suggested to my mother. My separation from the past, which was probably reinforced by my upbringing in America and my removal from a deep political memory of an “enemy,” helped make it possible for me to not only see a different national identity in a more positive light, but to also desire to understand that identity. I chose to study German and, with that, learn about German culture and society despite stories of WWII horrors from my grandparents, despite knowing that my great-grandmother’s brother was killed in a concentration camp for helping Polish Jews, and despite some of my family members asking me about the “enemy.”

What future is there for the world if the enemies of the past forever remain the enemies of today? Times must be different. Projects and institutions like the European Union are trying to make times different. Yes, globalization has its issues, but it also offers the chance to build new connections across political memories and nationalities—and those connections are very much grounded in identities. I look forward to learning more about my own during the rest of my time in Berlin and in Germany as a whole.