I remember arriving at what would become my home for the next three months for the first time. I had two large (definitely overweight) suitcases and looked around for the elevator. My host family in Strasbourg noticed my confusion and told me that there was no elevator, and we would have to walk up the five flights of stairs. I looked at the stairs, then back at my heavy suitcases. I had no idea if I would be able to make it up all five flights. My arrival experience was metaphoric for my study abroad journey. Like those five flights of stairs, I was nervous about having to take all my classes in French, not knowing a single other person in Strasbourg, and having to adapt to a whole new way of life on my own. I would soon discover that climbing the stairs wasn’t that hard; similarly, studying abroad didn’t present as many challenges as I thought it would. Rather, it would teach me more about myself and French society, education, religious systems, and ways of life than I could imagine.

Although I had interned and attended brief summer camps in France before, I had never attended a French school or lived in Strasbourg. Therefore a few things really stood out to me when I started classes. The first thing that really struck me was the French view of work/life balance in the university context. Georgetown is a very 24/7 environment: if you are not in class, you are doing homework; if you are not doing homework, you are at a club meeting or grabbing a coffee with someone. Life at the University of Strasbourg was the opposite. I had class two times a day, with a break in between to observe lunch hours. Outside of class, students focused on other parts of their life. During my campus tour, I remember asking what student organizations I could join on campus. The student looked at me like it was a strange suggestion and asked me, “Why would you want to?” I explained that I thought it would be an excellent way to meet other students, and she responded, "Why don't you try a bar?"

This was reflective of how French people viewed work and school in general. University was something one attended, but not something that consumed your whole life. Most classes did not have homework, and assessments were given once or twice during the semester. One goes to work and gives it their all during those hours, and after that, they go home and focus on life. This is a far cry from the constant 24/7 of Georgetown. It also was a source of frustration because I was not used to having so much time outside school-related activities. Especially as a senior, the experience made me really reflect upon what I wanted post-college. What would my healthy work-life balance look like? If I wasn't working, what would I do with my time?

The blended French-German culture of Strasbourg struck me. When we think of a country, we often think of unique national characteristics exemplifying its culture: architecture, art, language, food, etc. However, in Strasbourg, I saw a beautiful example of what fusion culture looked like. One could walk down the street and pass a boulangerie selling French baguettes and German pretzels. Street signs are in both German and French. People easily moved between Strasbourg and the bordering German towns as though they were one country. The idea that two countries could be so interconnected and beautifully blended was new to me, and I loved it. As someone who hopes to work in international development one day, it made me think of what the ideal for border cities really could be and what a positive impact it could have on regional cooperation.

Race, religion, and society were also prominent themes that I confronted throughout my experience. France is a secular country, and there is a strong belief in the idea of laïcité: religion is private, not public. As a Nigerian, I am used to religion being brought into all aspects of public and personal life. Coming into an environment where it was even weird to talk about religion at school was definitely a novel experience. No one talked about their religious background or brought elements of it into a conversation. Even in a class discussing whether the Alsace region should become secular (currently the government still pays the salaries of the clergy and religion is taught in schools), no debate was held. It seemed normal that we would all agree public life should be secular. Coming from Georgetown, where we debate all aspects of religion and public life, this was a striking difference.

Similarly, race also was not discussed. I was taken aback when one of my professors mentioned that race was not a thing casually. Surprisingly, none of my classmates around me found this unusual; it appeared I was the only one who thought the color-blind statement was shocking. In another instance, I was talking with a classmate (from the same class, interestingly), and he mentioned that he saw no racial difference between the two of us. He found the idea that just our races (mine Black, his Arab) would cause problems for us in French society strange. He insisted he did not see color and simply saw me as a person. Both experiences left me thinking about what it meant to navigate France as a person of color and whether being color-blind is genuinely a solution to racism.

I finally got my two suitcases onto the fifth floor. I looked back at the stairwell, marveling at how high we climbed. Surprisingly, the climb hadn't been as challenging as I had thought it would be. Similarly, studying abroad flew by remarkably fast, and looking back, those few months turned into a great learning experience. I am grateful that I got to experience such a special time at a pivotal moment in my life. 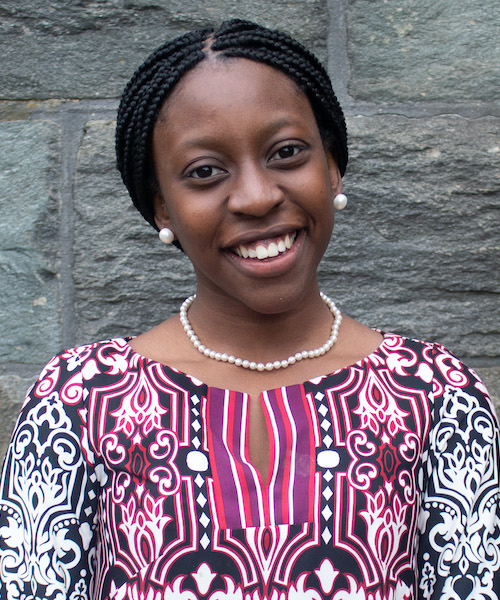 Alero Oyinlola (C’22) is from Ibadan, Nigeria and graduated from Georgetown University in 2022 with a double major in economics and French. Outside of school, Alero served as the president of the African Society of Georgetown and was a Baker Scholar. At the Berkley Center, Alero worked for Professor Paul Elie as a student assistant to the American Pilgrimage Project. In fall 2021, Alero studied abroad in Strasbourg, France, and participated in the Doyle Global Dialogue. She has a passion for economic development and an interest in Francophone countries within Africa. Alero enjoys reading, watching movies, dancing, and spending time with friends and family in her free time.