Who Am I in Amman?

We talk about identities as something concrete, tangible, and real. We don’t realize that who we get to be and what we get to celebrate about ourselves is determined more by the environment around us than by material facets of our being.

Throughout the past twenty-one years, I have experienced privilege in a way that I did not realize until now. As a Jewish, bisexual woman, I have found comfort in both the Jewish and LGBTQI communities in America. Now, in Amman I can no longer rely on either of those identities for comfort and community.

In Morocco—where I studied last semester—I had no problem telling people around me that I was Jewish. The relationship between Judaism and Islam is still celebrated in Morocco despite the harsh sentiments against Israel. Almost everyone I spoke with recognized that my Jewish religion is different from a Zionist ideology. Coming to Jordan, I naively expected the same to be true. I expected to be able to say I was Jewish and laugh with the people around me over shared words in Hebrew and Arabic and shared customs in food. Such an expectation was quickly shut down after being told in orientation to only share my Jewish faith if I really trusted the individual with whom I was speaking.

I am not angry about having to hide my Jewish identity. Nor am I upset at the Jordanian society. I understand that more than two million Palestinian refugees live in Jordan, and the religion practiced by the majority of individuals in the state of Israel can hardly be separated from the politics and tactics of Israel itself. However, for the first time in my life, I am put in a position where I need to actively hide my faith—and, if asked, lie about it. This is a faith that has impacted my family for generations. My faith has given me a home, comforted me, and brought love and peace in times of need. In describing myself, one of the first words that comes to my mind is “Jewish.” It’s a word that I have relied on as part of my identity. Now, times have changed.

Side-stepping away from Judaism, this past year I have finally come to recognize and celebrate the bisexual part of my identity. Now, living in a conservative country (though in Jordan being homosexual is not legally forbidden), I am forced to hide and suppress another aspect of who I am.

When I first understood how comprehensively I needed to hide my Judaism and my sexuality from strangers, acquaintances, and even some friends, I was deeply saddened and frustrated by the situation. Who could I be, if not the Jewish and bisexual woman I have come to know and love? Now, I am striving to change my thought process and take this opportunity to relinquish parts of my identity—if only for a few months—that maybe I have come to over-rely upon. In many ways, I am excited and thrilled to see what parts of my identity will come out in Amman and what this new environment will bring to the forefront of my persona. It’s still only my first week in Jordan, so I don’t feel that I truly know anything “real” about the country. However, I cannot wait to learn more about both the culture and myself in the process. 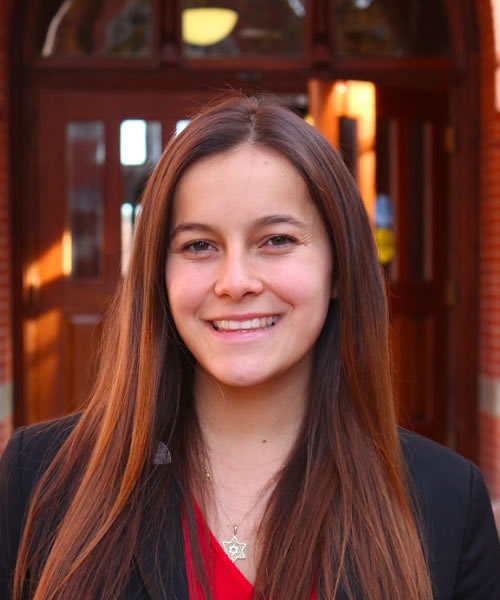 Sarah Baron (SFS'20) majored in regional and comparative studies with a focus on Africa and the Middle East. She previously worked at the Berkley Center as a student assistant and aided with front desk clerical duties. During the fall 2018 semester Baron studied in Rabat, Morocco through a program with the Institute for the International Education of Students; during spring 2019 she studied in Amman, Jordan, and blogged for the Junior Year Abroad Network.